This is my first political post. I've always been intrigued by conflicts and maps, this for me is another way to satisfy my intellectual curiosity. Diclaimer: I do not claim to be an expert, I'm just seeking a different perspective from the one in the media and this encourages me to tackle the issue from different angles and ask questions. So let's get political!

Without going much into details, the Sunni and the shia division occurred over the dispute of succession to the prophet Mohamed. The prophet had two eligible successors, one was a member selected by the community and the other was a member who was believed to be the successor by right ("spiritually guided"). Fundamentally it is a division of customs (Hadith), At least that's how it is taught in western schools. This is the most simplistic way to describe the root of the sectarian division in the middle east. This seperation span among predominantly, the shia and the Sunni. One can however appreciate that over the caliphates, each group had the privilege to head over Islam as a whole, mixed with the conquests, and empire successions, the allegiences to each sides have formed and gravitated both geographically and ethnically. Through maps, you start to understand that present day shia'a are very dominant in Iran, and parts of Iraq, Yemen, and Afghanistan. 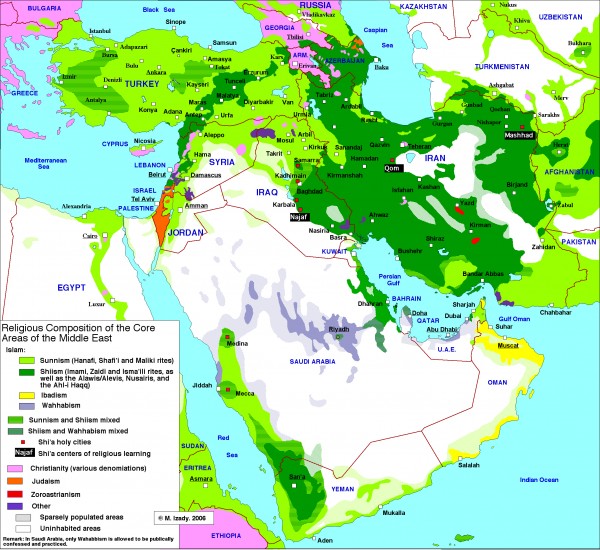 The Sunnis are equally, or less present in Iraq, making Iraq a tricky battle ground for religious influence. I'm originally from a place where divisions like this are mostly tribal, therefore for me it was important to understand the very tightly coupled and at time not mutually exclusive religious and ethnic divisions in Iraq. One can be tempted to draw a thick line and assume only persian influence inside shia'ism, and attribute that to only Iran, but that would be wrong. I came across project Gulf2000, that provides comprehensive maps of religions and tribes in that region. This map offers an even more complex take on the topic. The region is both religiously and ethnically divided but not mutually exclusive like I mentioned before. Iran itself is not only Perisans, but also Lurs, that share a border with Iraq. The Lurs themselves seem to be predominantly shia, in contrary to the baloch who are Sunnis. In starch contrast to the kurds and tats who board the capsian sea who are all but just sunni and shia. There are ethno-religious groups, but in Iraq right now, the nation is predominantly Arab, unlike Iran's more distinct tribes, the division is mostly religious, with the understanding that leaders of the communities, chiefs and imams are not just ethnic leaders. 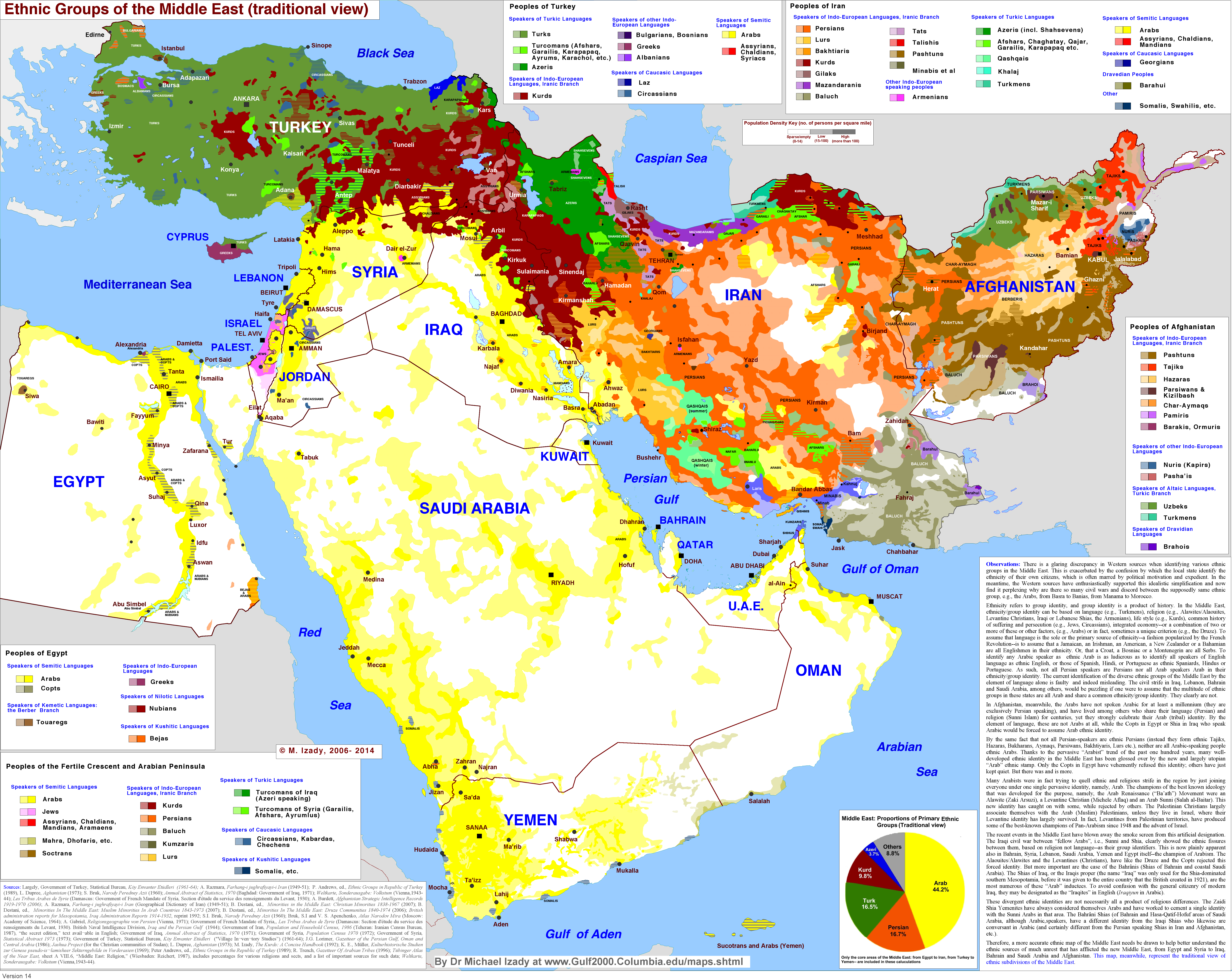 The very multi-inclusive delimitation of the religious and ethnic-scape of Islam in the middle east easily contradicts the representation in the media that one side against the other. That rhetoric is not only misleading, but is highly deceiving. There's a group, constituted by partially Sunnis to retake Iraq, or like they have been vindicating lately, create an Islamic state under the sharia. However, the little to no resistance they've encountered in the north is not a direct pledge of support, it's a respect to the force invading, and no real incentive to fight back their own brothers, in a way it is a common interest, to overtake the shia led government, but I doubt it's a general consensus like the media describes. Even the dominant radical groups didn't see eye to eye on how to achieve their means in Iraq, like you are about to read, they aren't really one big branch but more like a conglomeration if I could describe them as such.

I've been preparing this post for several days, credit to someone who also through research and personal experience provided I feel one of the most complete answers, and insights I've ever read on this topic, he was so thorough, I decided to cut short my own analysis and in a sort expose you to his view:

ISIL is an unrecognized state and active jihadist militant group in Iraq and Syria. In its self-proclaimed status as an independent state, it claims the territory of Iraq and Syria, with implied future claims intended over more of the Levant, including Lebanon, Israel, Palestine, Jordan, Cyprus, and Southern Turkey.

The group in its original form was composed of and supported by a variety of insurgent groups, including its predecessor organizations, the Mujahideen Shura Council, the Islamic State of Iraq (ISI) and Al-Qaeda in Iraq (AQI), the insurgent groups Jaysh al-Fatiheen, Jund al-Sahaba, Katbiyan Ansar Al-Tawhid wal Sunnah and Jeish al-Taiifa al-Mansoura, and a number of other Iraqi groups that profess Sunni Islam.

ISIL is renowned for its harsh interpretation of Islam and brutal violence, which is directed particularly against Shia muslims. It has at least 4,000 fighters in its ranks who, in addition to attacks on government and military targets, have claimed responsibility for attacks that have killed thousands of civilians. ISIS had close links with al-Qaeda until 2014, but in February of that year al-Qaeda cut all ties with the group, declaring that it was "too extreme".

This answer is from a quora question, answered by an Iraq war veteran named Jon davis full question here: http://qr.ae/YB1e0

In his thorough answer he also expose a very important fact and that sheds more light to where i'm going with this; the mess in Iraq is not only sectarian, but has a heavy dose of politics and other factors much more complicated. The problems we have in Iraq today are not a simple matter that the political leaders can sit and just throw blame fingers each others way. There are Saddam's ex military men that did not get a fair seat at governing the country. There are the small ethnic groups that either felt not included in the new government or simply disregarded, within them, a major religious group, the Sunnis as I mentioned before. There is also the will and expression of Iraqis to have the country to themselves, ironically a country they only conveniently claim when there is a foreign force involved, but satirically they cannot defend against any invaders. There are the nut jobs from Syria who couldn't over throw the government and decided instead to retreat literally into Iraq. There is a very healthy dose of mismanagement that span between parties on how to handle the issue, the former didn't know how to form a strong coalition to lead, and the latter pulled out way too quickly out of Iraq. Let's also not forget the British, it is lame to take this issue back so far but, the boundaries created of the countries in the region, was to satisfy their colonial ambitions, and completely wrong. What the map should have looked like is below, and I think the biggest other problem he also didn't fall shy of mentioning, is that we as American citizens do not take enough interest in these matters to sway votes or put pressure where it's due. The chaperon at the time gets the blame, and we pretend like all the problems are only due to mismanagement, there will be price we will pay, there will be more of our tax money involved, and as a people we will not exercise our rights to provide an oversight on what is being done, even at the cost of the lives of our borthers, we remain quite passive, or simply uninterested, but that's none of my business though [hermit the frog reference]. 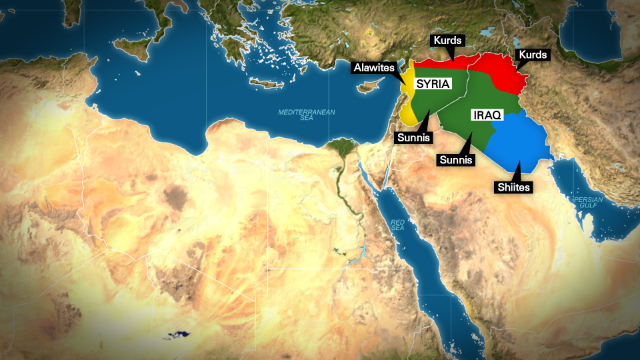